Both the Prussian[1]This article is a summary of the Introduction in “The Descendants of Daniel D. Peters, 1794 – 1879” by Herbert D. Peters, 2001 census of 1772 and the diary of Aeltester Gerhard Wiebe refer to Baumgart, Prussia, as the residence for Elias Peters. Son, Daniel Peters, and Elisabeth Brandt had only one child, according to records – Daniel Daniel Peters (1794 – 1879). He came to Russia in 1806 with his maternal grand-parents, Jakob J. and Susanna Brandt, although this fact is contradicted in some documents.

In 1817, Daniel D. Peters married Katharina Hamm, daughter of Michael Hamm and Maria Goossen. Their first home was in Schoensee, and in 1822, the family moved to the village of Ruechenau. Around 1835, he moved his family north to the Chortitza area.

As a young man, Daniel Peters had been a locksmith and served as a preacher but appeared not to be satisfied with either profession. Little recorded history of his early years exists, but whatever he turned his attention to, the financial returns were significant. He accumulated a large enough sum of money to be able to buy 6000 dessiatine, or just over 16,000 acres of land. When he moved north in 1835, he built his first home near the Dnepr River, about 18km north of Chortitza, and here he started farming and raising sheep.

Around 1840, Daniel Peters traded his 16,000-acre estate on the Dnepr River for a parcel of land near the main road from Zaporozhe to Ekaterinoslav. This road was used for both commercial and military traffic, using either horse-power or ox-power. He built up a thriving business, trading his well-fed sheep for the underfed and tired sheep of the drovers who were taking their sheep further south to sell to the military which was poised for battle with Turkey over the Crimea.

This estate became known as Petersdorf, located 18 km north of Chortitza in the Old Colony. In 1869, its isolation came to an end when the Old Colony purchased 23,350 acres of land, north of Petersdorf, to provide farming land for their increasing population. Here, the four villages, Nikolaifeld, Franzfeld, Adelsheim, and Eichenfeld were established. Three years later, Hochfeld was founded on an additional 2,590 acres. Eventually, Petersdorf was incorporated into the Yazykovo Volost.

Was Petersdorf a village or a large estate? The entire population consisted of the descendants of Daniel D. Peters. In fact, because the population grew so large and land base was adequate, two more “villages” were established on Daniel Peters’ land holdings.

Daniel Peters had 18 children, of which 11 survived into adulthood. Most of them also had large families. The Peters family grew very quickly with 70 married grandchildren. These families gradually began to disperse because the fields were too far from the village. Each of Daniel’s children was given about 1000 acres so that they could establish their own ‘kutors’ or ‘villages’. Katharina (Peters) and Paul Peters founded Paulheim; Helena and Franz Pauls with Anna and Jakob Siemens founded Reinfeld; Maria and Bernhard Pauls emigrated to Kansas. Brothers, Heinrich, Kornelius, and Jakob Peters, with their families, moved to Nikolaipol. Maria Janzen Peters, widow of Daniel D. Peters’ oldest son, Daniel, moved to Liebensfeld, and Elisabeth and Jakob Krause moved to Petrovka. Some of the grandchildren move to Orenburg and even Siberia. By the turn of the century, with some exceptions, only the extended families of Johann and Franz Peters remained in Petersdorf.

The main street of Petersdorf ran parallel to a small stream which flowed through the village. Large home plots lined either side, with back yards abutting onto the stream, on which three dams were constructed to create pleasant ponds large enough to be stocked with fish. The largest pond was over 200 metres in length. The village included homes for the school teacher, the shepherd, the night watchman, the herdsman, the blacksmith and other workers. Because of the large size of homesteads, it was possible to plant large orchards and gardens, including corn and melon patches, right in the village. Johann D. Peters and his son Daniel were noted for their skills in propagating many varieties of fruit trees. The barns were not attached to the houses but set apart. Houses were rectangular and with a steep roof, covering large attics used for storage of wheat and other grains.

The main industry was grain farming and raising of cattle, pigs, sheep, and horses. With an abundant supply of soil, brick manufacturing became very profitable and with a sizeable work force; keeping up with the demand was challenging at the best of times. The factory remained in operation until 1914.

The Golden Era of Petersdorf came to an end with the Revolution and Civil War. The horrific ending is well-documented elsewhere; suffice it to say, many members of the extended Peters family were victims of the pillaging and murderous rampage by hordes of bandits in 1919. In 1926, prior to emigrating to Canada, some former residents returned to see what was left of the village and found the dams were deteriorating and the buildings were in shambles and overgrown with weeds.

It was not until 2001 that visitors found the abandoned and neglected cemetery. Great, great, granddaughters of Daniel D. Peters (Anita Regehr Toews, Mary Regehr Dueck, and Lorraine Regehr Harms) found it to be a “jumble of weeds and overturned stones”. Mary writes, “It was a very moving experience to walk these ancestral areas and be the first since the 1920s to actually find the Petersdorf cemetery.” They managed to turn one large tombstone over, with the inscription: “Andenken dem Vater Johann Peters, geb. 29 November 1833; gest. 11 April 1906; Selig sind die Toten, die in dem Herrn sterben.” 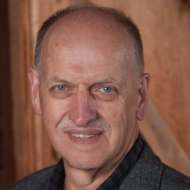 Dave is a first-generation Canadian, born and raised in Abbotsford, British Columbia. Dave is a retired teacher and school administrator. He holds a B.A. (Sociology) from Simon Fraser University and a M.Ed. (Administration) from the University of Victoria. Dave served two years with MCC in the Democratic Republic of Congo with PAX. He has served on numerous church and para-church boards and committees over the years, and has been serving as an elected Councillor since 2005 on Abbotsford City Council. Dave and Grace are members of Level Ground Mennonite Church. He has been a member of the Rotary Club of Abbotsford since retiring. He is married to Grace, and they have two married sons and seven grandchildren. Dave has a keen interest in family history and genealogy, both of which occupy some of his leisure time.